There is a saying in Finland: “There are no dead ends.” You hear it a lot. Educators, in particular, are quite fond of saying it…and when they do, their whole demeanor changes: their backs straighten, their eyes brighten, their voices deepen. It’s clearly a point of national pride. It could be the national motto: “Ei umpikujaa!” Unfortunately, this moment of philosophical bliss is usually preceded by my statement, “There are way too many opportunities to fail in the American public school system.” It’s a sad and awkward little moment, but a necessary one. The fact that there is a country that tries its damnedest to mute that human impulse to quit, to say “no more,” and then legislates that idea, is inspiring.

I have been thinking a lot about dead ends since first hearing this. Like many primary and secondary educators in America, I’ve had periods when I’ve locked myself in the classroom, insulated myself with “humanistic” pedagogy, and poked my head out to see what season it was. It’s unhealthy…and exhausting….and in the end, it’s simply another way to ignore the reality that we could be doing so much more to help our students if we worked collaboratively to change the system. Being part of a system that creates more dead ends than pathways without actively trying to change it, that’s being part of the problem….and I don’t like being part of the problem. 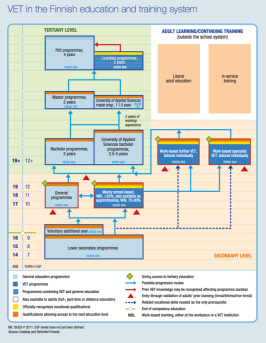 So, over the past six weeks I have been taking a hard look at how the Finns approach problems, and what I have found is simple: the “system” engenders opportunity. It’s engineered to encourage learning opportunities at any point in one’s life, not simply when one is young. Now, that is not to say that the Finnish educational system is devoid of flaws…it isn’t. Like any system created by people, it has its people problems; its strengths and weaknesses, its esoteric nooks and crannies of archaic logic, its dysfunctional idiosyncrasies. However, the system is intact and thriving because its mission of “no dead ends” is so clear and so collectively bought into.

It feels like the American philosophy is centered more on quantifiable “results” than on the purpose of education. Degrees, diplomas, standardized test scores…they are all measured products of the system, not of learning itself. If we could step back, stop measuring, and focus on what’s truly important to us (putting people on the path to being lifelong learners), I think we’d have a chance to effect real, sustainable change in America.

So, where do we start to change this? If you have thoughts on this, I’d love to hear them.

2 Comments on “NO DEAD ENDS”